China demands apology from Sweden over treatment of 3 tourists 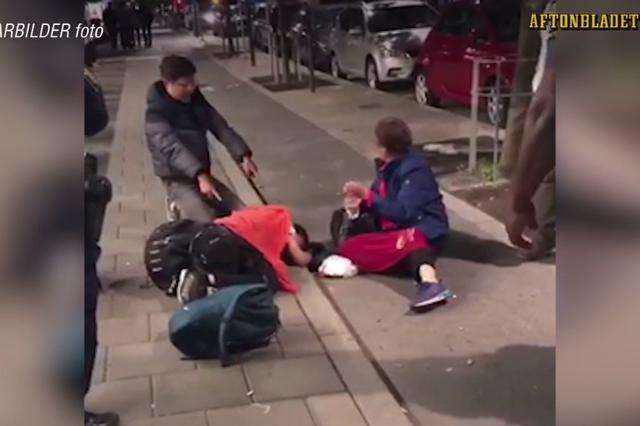 What began as a dispute over check-in times between three Chinese tourists and a Swedish hotel has somehow escalated into an international incident, with Beijing demanding an apology for what it says was a human rights violation.

China has issued a safety warning for its nationals in Sweden after the three tourists were “brutally abused” by local police on September 2. On Monday, Beijing urged Stockholm to take their concerns seriously and respond to the complaint immediately

The Chinese family arrived to the Stockholm hotel after midnight on the day in question - several hours before their scheduled arrival. After being told they could not check in yet, they asked if they could wait in the lobby. The hotel staff ordered them to leave when they allegedly started to make verbal threats, before calling the police to forcibly remove them.

Dramatic video footage showing the family being carried out by police went viral. The son can heard repeatedly yelling “This is killing”, while another clip shows the trio crying loudly on the ground outside, with the mother yelling in Chinese: “Save me”.

On Saturday, the Chinese embassy in Sweden said that China’s ministry of foreign affairs had reached out to the Swedish government “stressing that what the police had done severely endangered the life and violated the basic human rights of the Chinese citizens.”

The hotel said the family had arrived the day before their booking and they had done “everything we could do for this guest.”

“But at the same time we can not accept that our staff are exposed to threats and that other guests will suffer from a threatening situation,” the manager said to the newspaper Aftonbladet.

Swedish police apparently had the time and resources to eject a disgruntled family from a hotel while ignoring serious threats to safety of its citizens, though. The current socialist government is under increasing pressure to tackle the surge in crime which has seen up to 22 cars burned or damaged across the southern region of the country.

Sweden has not yet responded to China’s request for an update on the investigation.

This is why even though I'm Irish I will never set foot in Swedistan.

The Chinese are some of the greatest people why treat them so.

Amazing , the Swedish police manhandle 3 irate Chinese tourists and yet they let the sponging migrants , rape , murder and pillage their country and not a word said.

lol. They arrived a day early, then proceeded to act like toddlers deprived of tomorrow's sweeties.

Chinese tourists are famous for being rude. I wonder what is the interest of the Chinese government in this apparently rude trio.

That maybe so....but as a white living in Australia. I would never visit Sweden that as really put me off.

I think you are right. I found the Australian police to be extraordinarily polite with none of the arrogant superiority that is common among the British and American police.

if you white invaders can talk about human rights, then they can too!

Strange Swedes as they have no problem with welcoming illegal immigrant single men from the Middle East!

Please forgive these Chinese, they didn't understand current Swedish culture: they should have prayed to Prophet 'Aloha' on their knees in the lobby instead. When hotel demands them to leave, just accuse Swedish of being Islamphobic, and they'd be given free housing, welfare, citizenship right away

When I arrived just before midnight at a Chinese hotel, I was charged for an extra whole day. So, with that in mind, the Swedes should have accepted the Chinese family and charged them an extra day and not refused them rooms etc Clearly the Swedes are not as business-savvy as the Chinese.

It's ok to transfer them out of the hotel. But can't the Swede police find a better place than the cemetery ? A 3rd world country's police would handle this situation better. Sham on you, Swede police...

God's children know how to judge this..

It's inhuman to treat another human this way and accusing their country doesn't respect human rights.

my missus is Chinese and I've just watched a Chinese TV debate on this and even most of the Chinese think the family are in the wrong and the police quite gentle in removing them.

your missus should also tell you that its in the Chinese culture and blood to first criticize yourself before you criticize others. please wait for the initial self search to be over and you'll hear the other side

These Chinese tourists should declare they are Holocaust survivors. They are Chinese Jews. Then they will be greeted like royalty.

I don't understand why Chinese visit such a country ? Spending money there and get insults.